It's been a few years since we dated and I still am absolutely amazed by his talent. He's one of the coolest most laid back cats I know. Love when my phone rings or I see a text that says "YO! What's good?" cause I know we are going to have a great funny conversation. But when it comes to his guitar the man pulls this emotion out of you, clear evidence of what natural talent, hardwork and sheer determination can get you, I would like to introduce you, Ladies and Gentlemen, to Mr. Steve Wyreman.... 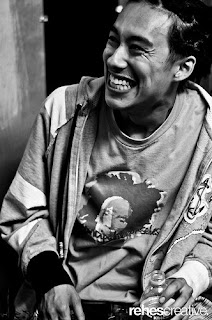 ME: How did you get started professionally playing the guitar?

STEVE: By playing around the Bay in clubs and churches. Then when Keyshia Cole got signed I was apart of her band, I have now been with her for 7 years.

ME: What was your first major gig?

ME: I remember from our many chats that you are not "formally trained," when did you first pick up the guitar?

STEVE: Around 8 or 9, I mowed laws to purchase my first guitar.

ME: Where are you from? 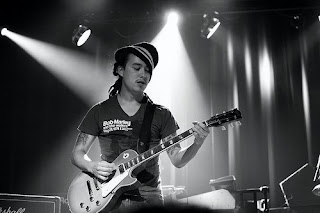 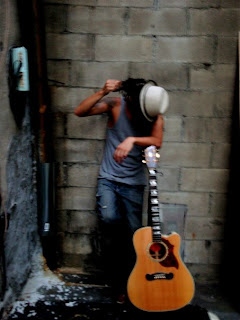 ME: What drew you to hip hop?

STEVE: I learned to play the blues at 14, soon after I started having gigs with blues bands, which is the root of all music. I have always listened to Stevie and Marvin but I also have an ecelctic taste in music ranging from The Parliment to David Bowie. I began playing church gigs at 17 and the people who he knew from those gigs would call me for R&B gigs.

ME: Who have you worked with? 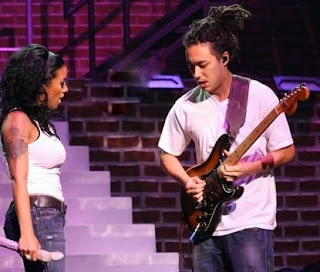 ME: What would you say are some of your most humbling moments?

STEVE: I would say when I battled Ernie Isley at the
House of Blues in ATL and from that i was invited to a jam session with
Prince. Another [humbling experience is] with Lauyrn Hill playing "Zion" in Japan in a hotel bed
room, just her voice and my 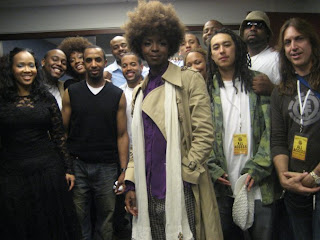 EVE: Who are you working with right now?

STEVE: Richard Ashcroft of The Verve, you know the song "Bitter Sweet Symphony," right? Well he formed a new band.

ME: What would you say is the biggest different between your hip hop gigs and this "rock" gig?

STEVE: With the R&B gigs I am nothing more than a back up musician : think Jimi hendrix before he became Jimi Hendrix! To the audience you don't have a name! 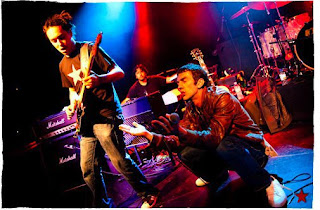 With the rock gig I am a major part from the studio to the performance. I have more solos up front with the Singer.

STEVE: My passport is full, actually you reminded me I need to get pages added because I'm headed to Japan soon!

Me: Where has music taken you?

Steve: All over America 15 times over expect Alaska! I have been to Canda, Mexico, Europe (all over), Japan and the Carribean a few times.

Me: What's your goal?

Steve: I am not looking to be an artist, I am really interested in getting into production. I want to “change music back to music,” take it back to the days when live instruments were used in the studio sessions. I also want to get on the rock scene as a well known guitar player.

Me: What is your favorite guitar?

Me: What are some of your horrible experiences on the road?

Steve: Man let's see I got paid in counterfeit money, on one tour the tour manager skipped out with the money and didn't pay the dus driver so he sold all the band's stuff. The bus crash with The Coup. I've been held up at gun point and the cops stopping the tour bus because they thought we were trafficing cocaine. All learning experiences!

Me: How do you stay working?

Steve: Stay relevant and stay relatively professional.make your flights, and do your job. It's more than playing , you have to stay professional and cool.

Me: Does it surprise you how much your name and work is out there?

Me: Who is your ideal "Bombshell?"
Steve: Come on man! (Laughs) I would say Erykah Badu! But I work with or have met alot of the females most dudes trip over and so I'm not really into super glammed up R&B chick.

Me: What is your heritage?

Steve: Most people think I’m mixed with Black, but I am Asian and Asian and White!

You can catch Steve on tour with Richard Ashcroft, he's also doing some work with Hip hop and R&B producer No I.D. (that's him playing that soulful guitar and bass on the "Tears of Joy" by Rick Ross featuring Ceelo Green). If you need more information or would like to catch more videos of him playing just google the man, Steve Wyreman. I have put a little video together for your enjoyment though and I am ending this affair with a picture I told a while back with my favorite guitar in Steve's collection!! 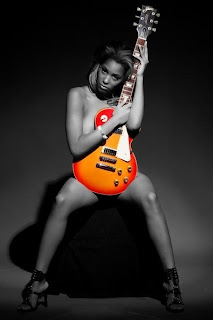 Posted by Bombshell Bella at 3:10 AM

May I shoot You?